Growing up, I've been taught about so many things, but no one ever really taught me how to cope with grief

Yesterday marked the 40th day of my dad's passing

41 days ago – on Monday, 29 January 2018 at 5:13PM, the doctors called the time. God finally called my dad to be by His side. It was not an easy time, neither it was a surprise. Deep down in my heart I kinda knew that the day would come sooner or later but I never thought the day was finally in front of me 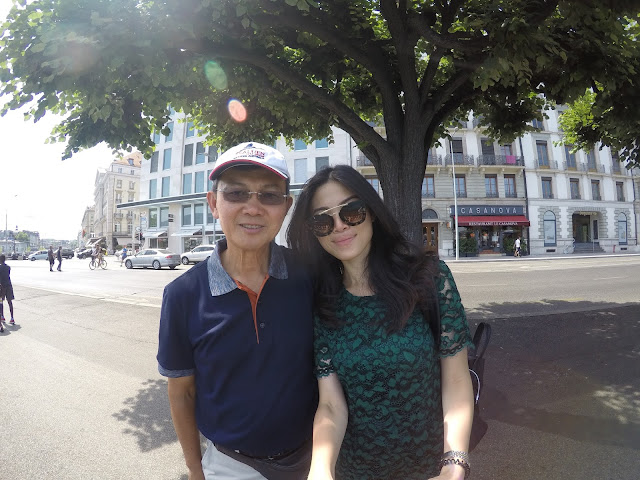 My dad was diagnosed with Nasopharynx Cancer (cancer location: behind the nose) in December 2011. He fought a hard battle with chemo and radiation early 2012 and had a good 4 years of healthy living. But in early 2016, when he did the check up in Singapore we found out there was a new activity in his nose beside the old cancer location. We were quite devastated as the doctor informed us that doing another chemo was no longer an option. So we had to find a new way and we found this radiation therapy called Cyber Knife in Tokyo. Cyber knife is one of the most advanced forms of radio surgery (radiation) — is a painless, non-invasive treatment that delivers high doses of precisely targeted radiation to destroy tumors or lesions within the body. It uses a robotic arm to deliver highly focused beams of radiation.

At the time, everything made sense. My youngest brother was about to start his Bachelor study in Tokyo – it made things easier for us to have someone familiar with the city. After done with 3 radiation sessions, my dad could go back to Jakarta. There was no side effect at all, he could go straight back to work. After few months, we found out my dad has won the battle again.

But I guess this cancer inside my dad's body is quite persistent (just like my dad) – in April-May 2017 we found another alarming activity in my dad's check up result, and the cancer had spread to 5 different locations around the nose and throat area.

I was like WHAT THE HELL IS GOING ON? Why did it keep on happening over and over again?

My dad's doctor in Tokyo said the cyber knife treatment was still a feasible option. So of course with keeping in mind that the last cyber knife he did was a huge success with very minimal side effect, we decided to have another go at the treatment.

However, our trip to Japan in June 2017 was our last family trip together. After completing his treatment (this time 5 cyber knife sessions), something was not quite right. He didn't feel well, he felt like masuk angin and beginning to have flu.

Starting in September 2017, the headaches started. The headaches were so acute to the point he couldn't sleep. He was on painkillers every day. But that didn't stop my dad from going to the office, attend meetings and events, etc etc. I must say he was a tough champ. He never showed to anyone outside the house that he was in pain.

Then it got worse, he started to have trouble swallowing. My mom had to turn his food from solid to liquid. It came to the point where swallowing water is a tough job. Every time something went down his throat, he started coughing and throwing up.

And then it just got worse and worse and worse, and yet he still went to the office everyday, played golf whenever he felt he had the energy, attended monthly meetings, and even his high school reunion on his final days.

It was not a pretty scene when my dad passed away, my hands were covered in his blood and I don't think I will ever recover from that. The memory sticks – I felt that his grip on my hands started to slip away, and I'm just numb.

I didn't know how to cope with grief, I've read about 5 stages of grief and I think it's all mixed up.

For sure, I'm not in denial. I accept and I'm okay with the way things are. I know things happen for a reason, I know he's in a better place right now, he's not feeling anymore pain, no more headaches, no more choking on his own food, so I know he's good up there. And I'm damn sure that my dad would be so pissed at us if we can't move on. So no choice other than being okay with what happened.

But, there's a hole inside me, a hole that I know will never go away. I'm just trying to find a way to decorate the hole, so it will be filled with flowers and other pretty things so you can't see the hole.

Those flowers come from the support of you guys. Boyfriend, best friends, even people that I don't know of.. So thank you, for giving me and my family strength. Another thing that I always think about is that I don't want to be a disappointment to my dad . He has been a great inspiration for me ad after he left – I think it's quite hard to fill into his shoes. I just want to keep his legacy alive, and not giving him a bad name.

So for now, my goal is just to go day by day, just like how strong my dad was throughout his battle with cancer, that's how strong I want to be, for myself and my family. I need to be strong, stay positive, and keep moving forward. I'm scared my dad get angry with me hahaha.

I believe the worst has passed and nothing could happen will be worse than this. I hope when the time comes, everyone of you can be strong and have a big heart to let things go and move forward with your life. And remember that I'll keep you in my prayers, so don't hesitate to talk to me!

What kills mehe most right now is how I miss him so terribly much. I still don't know how to cope with this, because this part is hard and damn tiring. So tired that everytime I see picture I cry, it's not that I'm crying because I'm sad, it's like out of no where my tears started to fall and it's like an emotional rollercoaster. Like can I just miss him without having my tears fall down like a freaking niagara? 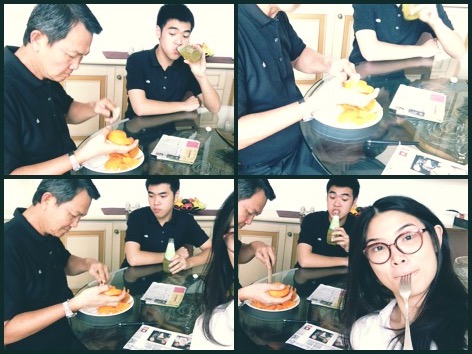 So yeah, I think that's all right now. Here I am right now, in my room alone (first time since he passed away)... couldn't sleep. Staring at this pictures of him cutting us some mangoes. Will update more soon xx
Posted by Caroline Robianto at 4:30 AM